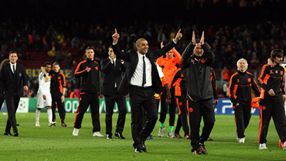 The Italian has engineered a remarkable turnaround in the London club's fortunes since taking over on a temporary basis last month, leading them to the final of the FA Cup and, perhaps more importantly given Abramovich's obsession with winning the competition, a Champions League final.

Under Di Matteo, their former player, Chelsea managed to get past a team many consider to be the best the game has ever seen, beating Pep Guardiola's Barcelona 1-0 in London last week and then fighting back from 2-0 down with 10 men on Tuesday to snatch a 2-2 draw and knock the holders out 3-2 on aggregate.

"We've had a difficult season but they always managed to produce something special when we had to and I think that's part of the DNA of these players," Di Matteo said.

It was not pretty, with all of the Chelsea players pitching in to thwart waves of attacks orchestrated by Lionel Messi, Xavi, Andres Iniesta and Cesc Fabregas, and they needed a large slice of luck in both legs of the semi-final.

But the 41-year-old Di Matteo now has a chance to give his Russian billionaire boss what the millions spent on players has so far failed to produce - a European title.

At his post-match news conference at the Nou Camp, Di Matteo was characteristically modest and calmly attributed all of the team's success to his players.

He should take some of the credit, however, after having to shuffle his defence following an early injury to Gary Cahill and the dismissal of captain John Terry just before half-time, while introducing a fresh-legged Fernando Torres late on proved an inspired decision when he netted the equaliser.

"We had all the difficulties you can imagine in any football game tonight and we managed to qualify against Barcelona which is quite incredible," added Di Matteo, whose side are sixth in the Premier League after struggling under Villas-Boas.

"I was just trying to get the best out of the group of players that we have."

Di Matteo will face another challenge preparing his team for next month's final when they will play Real Madrid, coached by former Chelsea manager Jose Mourinho, or Bayern Munich.

They will head to the showpiece in the Bavarian capital with Terry, defender Branislav Ivanovic and midfielders Ramires and Raul Meireles all suspended, while Cahill faces a race to be fit along with injured centre-back David Luiz, who missed Tuesday's match.

"For the moment we will try to enjoy this night," Di Matteo said. "Then we'll see who is available and I am sure we'll put a strong team together that will do the club proud."