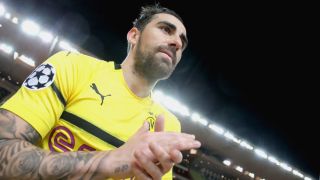 Dortmund extended their lead at the top of the table back to nine points with a 2-1 victory at Signal Iduna Park.

And they had to do it largely without talisman Alcacer, who has 12 Bundesliga goals to his name this season, after he came off in the 34th minute.

Alcacer was replaced by Mario Gotze, and goals from Jadon Sancho and Marco Reus earned Dortmund all three points.

"It looks like a torn muscle," sporting director Michael Zorc said in quotes reported by SID.

However, Zorc expects Alcacer will be available when Dortmund resume training on January 3.

Alcacer joined on loan from Barcelona in August. In November Dortmund exercised the option to sign him permanently for €23million on a five-year contract.

Bayern Munich will leapfrog Gladbach and move within six points of Dortmund if they beat Eintracht Frankfurt on Saturday.