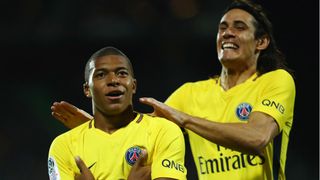 Unai Emery was thrilled to see Kylian Mbappe make a goalscoring start to his Paris Saint-Germain career as the capital club thrashed Metz 5-1 in Ligue 1 on Friday.

The Monaco loanee, whose move will be made permanent for next season, put the visitors back ahead after Benoit Assou-Ekotto had harshly seen red for a foul on the teenager.

Edinson Cavani netted twice, with Neymar and Lucas Moura also on target as PSG made it five wins in a row at the start of the top-flight season to show exactly why they are title favourites.

Emery still sees his squad as a work in progress, but he was pleased with Mbappe's display.

"We will work step by step," said the PSG coach. "We make our way with an idea, a style.

"The system is important, but it is important for me to have the balance on the ground between attack and defence. With individual talent, we need tactical discipline.

Emery's next test comes in Glasgow against Celtic, as PSG begin their bid for Champions League glory.