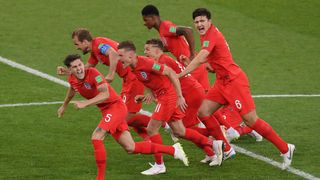 Harry Kane says he and his England 'brothers' are prepared to do whatever is required as they continue to chase their World Cup dream.

Gareth Southgate's side are preparing for a quarter-final against Sweden in Samara on Saturday as they bid to reach the last four of the tournament for the first time in 28 years.

Kane was on target from the spot in Tuesday's 1-1 last-16 draw with Colombia in Moscow - his sixth goal in just three appearances at Russia 2018.

Although the Three Lions were pegged back by Yerry Mina's stoppage-time header and fell behind in the shoot-out, they recovered to book their last-eight berth and Kane says a keen sense of brotherly love was central to that triumph.

"We're like family really," he told a media conference on Friday. "We've spent a lot of time together, we all get on very well. I spoke about that before the tournament, the togetherness and trust.

"You always want to prove on the pitch that we can do that and we have so far and it's made us stronger. After the game the other night, the joy on everyone's face, we'd worked so hard and to come through that, it makes us even more proud of each other.

"I look at them like my brothers and I know they look at me the same and we'd do anything for each other and that's what we've got to do for the rest of the tournament.

"When you go through a battle like that and come through as winners it gives you so much energy and so much belief to do it again.

"We're hungry for more, we want that feeling, if it goes to extra time and penalties we'll be ready. If we can win it in 90 minutes then great but we're ready to do whatever it takes."

Kane's team-mate Dele Alli has come under fire for what some perceive to be below-par performances at this tournament, but Southgate believes the Tottenham midfielder could hold the key to unlocking a stout Swedish defensive backline.

"Dele's performance against Tunisia was as good as he's had since I've been England manager," said Southgate, whose only fitness worry centres around Jamie Vardy's thigh injury.

"He's at his best making those forward runs and threatening opponents. The other night the game was a bit different, he did a diligent job without the ball for us and I think maybe we need to encourage him a bit more to get into those areas where I think his strengths lie and where he can have the biggest impact on the game, so that's something we've got to think about.

"He did a fantastic job for the team and sometimes against top opposition it's a balance of doing both.

"We want to create more clear chances and we can. That will be tough tomorrow, we'll have more possession but Sweden have proved they've got results with 30 per cent possession and possession doesn't mean you can win games.

"So it's about creating chances and Dele's a player who gives us an option to do that."