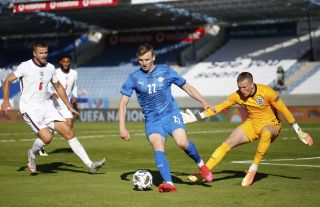 Jordan Pickford believes referee Srdjan Jovanovic may have been trying to even the score when he awarded Iceland a stoppage-time penalty as 10-man England survived to win their Nations League opener 1-0 in Reykjavik.

A drab encounter burst into life in the closing stages as Raheem Sterling won and converted a last-minute penalty.

Sverrir Ingason was shown a second yellow card for his handball offence in conceding the penalty, with England having already had Kyle Walker dismissed for two bookable offences earlier in the second half.

Calm and composed when it matters.— England (@England) September 5, 2020

The drama did not end there as Iceland attacked straight from kick-off following Sterling’s spot-kick and were awarded a penalty of their own as Joe Gomez was adjudged to have wrestled Holmbert Fridjonsson to the ground.

Unlike Sterling, however, Birkir Bjarnason could not keep his cool and blazed the resulting penalty high and wide of Pickford’s goal – with the England goalkeeper feeling official Jovanovic had been tempted to even the odds.

“I think Joe did fantastic all game and they brought a big lad on for the last five minutes and there’s a lot of bodies round him, so it was a tough one for Joe,” Pickford said.

“With us getting a penalty down the other end, I haven’t seen it back, but I think the referee might have made an early decision to just give it to them. But luckily we got away with one, a clean sheet and a 1-0 win for us away from home, which is good.”

Despite Iceland winning their late penalty, Pickford did not face a shot on target all game as England enjoyed 78 per cent possession.

The 26-year-old has come in for criticism for recent displays at club level for Everton but was pleased with his afternoon’s work for his country and believes the challenge posed by a resolute Iceland was something which can help England improve.

“I didn’t have much to do. It was one of those games where you’ve got to concentrate and be ready for anything to come at you,” he said.

“I think first-half I had one cross to deal with, and came for the cross and dealt with it well – but that’s what you’ve got to do.

“Sometimes those games happen and as a goalkeeper, they are the ones you need to be more mentally switched on for 95 minutes.

“They haven’t lost many games at their home ground and we just needed to show resilience and keep patient and the manager said to be patient, keep wearing them down and we’ll get an opportunity.

“For that the game is very good because you learn from them as a team and get better from them and we’ve got to improve. It is still pre-season for a lot of us and it’s good fitness for us, and a great result as well.”

A look at our #NationsLeague group after the first round of matches.— England (@England) September 5, 2020

Pickford said manager Gareth Southgate is yet to tell him whether he will keep the gloves for Tuesday’s Nations League fixture in Denmark or give either Nick Pope or Dean Henderson a chance to impress.

“He hasn’t spoken to us about anything – I think we all train hard every day and it is fantastic,” added Pickford. “We have had a great week and what happens will happen.

“The main thing for us was getting a result against Iceland. We’ll debrief the game and we’ll get recovered – but for me, nothing’s been said to us.”