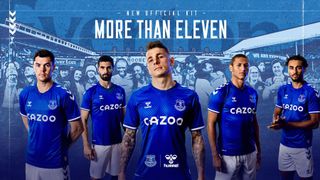 Everton's home shirt for next season's has reportedly become the club's fastest-ever selling shirt – and it's not even on full sale yet.

The Merseyside club have struck up a new three-year kit deal with Scandinavian brand Hummel, with next season's strip released to the public on Friday, July 3.

And, while the shirt is only currently available to pre-order, the club says it is already the most popular kit they've ever had.

Hummel is popular with football fans for its classic designs – particularly Tottenham, Denmark and Aston Villa kits from the 1980s – and it has proved an instant hit with Toffees fans, with many purchasing the kit over the weekend.

Responding to the news, Alan McTavish, Commercial Director at Everton said:“We knew that our bespoke Hummel kit would prove to be popular with supporters - and we are delighted with the overwhelmingly positive response that has helped make this the fastest-selling kit in the club’s history."

As well as Hummel's iconic chevrons, the kits also pays tribute to the Z-Cars theme tune that plays at Goodison Park before each game, with an image of the song’s soundbar expanded and embossed diagonally across the shirt.

Fans of the Liverpool club have reason to be excited, well aside from football fashion. Everton are about to go into their first pre-season with manager Carlo Ancelotti, who has lifted three Champions League trophies and won titles in all of Europe's top five leagues as a manager. They are also unbeaten since the Premier League restart, despite a tough run of games that included Liverpool and Leicester.