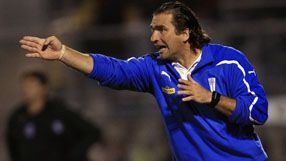 The Saints appointed Argentine-born Pizzi to replace Ricardo Caruso Lombardi as their coach on Friday after a string of poor results left them two from bottom of the 'Inicial' championship.

"The players have had an unusual and disagreeable week with the change of coach but they're aware they have to take on the responsibility and we depend on their sacrifice," Pizzi said.

San Lorenzo, one of Argentina's 'big five' clubs, have flirted with relegation all year.

They are fourth from bottom of the relegation table calculated on teams' average points over three seasons. The bottom three will go down in June.

The 44-year-old Pizzi, who began his playing career at Rosario Central before moving to Mexico and Spanish club Tenerife in 1991, has gained coaching experience in Peru, Chile and Argentina since hanging up his boots in 2002.

Caruso Lombardi, a renowned saviour of relegation-threatened teams, managed to keep San Lorenzo in the top flight with victory in a play-off last June but picked up only 10 points in 10 matches this season with just two wins and six goals.

Pizzi's first match in charge will be away to Godoy Cruz on Saturday.