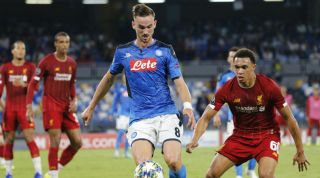 Liverpool have taken a liking to Napoli's Spanish midfielder Fabian Ruiz, but face stiff competition from the La Liga giants.

Napoli beat Liverpool 2-0 last night at the Stadio San Paolo, as the Reds began their defence of the trophy with a defeat.

At the heart of Napoli's impressive performance was their midfieler Fabian Ruiz.

Ruiz was player of the tournament at the Under-21 European Championship this summer, where he helped Spain to the title.

He has attracted interest from Real Madrid and Barcelona, who have reportedly been keeping tabs on the player for a while now.

And, according to the Daily Mail, Liverpool have also expressed an interest in signing Ruiz.

The young midfielder has been likened to legendary Barcelona midfielder Xavi, and Ruiz has expressed a desire to model his career on the Blaugrana great.

"I fell in love with football thanks to him," the 23-year-old revealed.

"He was a pillar for Barcelona and Spain for so many years and I dream of following in his footsteps."

RANKED The 101 best players in the Premier League right now