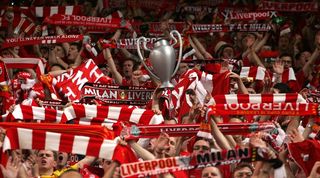 Jurgen Klopp’s Reds begin their defence of the Champions League title away to Napoli on Tuesday night. Trips to Naples aren't the easiest, with a football-obsessed terrace culture akin to... well, Liverpool.

Liverpool are hoping to retain Europe’s elite trophy for their first time since 1978, when a Kenny Dalglish goal secured a 1-0 victory over Club Brugge.

They will know as well as anyone how difficult it is to lift Ol’ Big Ears, having fallen at the final hurdle more than once.

Since their defeat to Milan in the 2007 Champions League Final, Liverpool have played 59 opponents in European competitions – lovingly compiled here by your faithful FourFourTwo servants.

It traces Liverpool’s 12-year journey through both the Champions League and Europa League – and misses out the years where they didn’t make it to either. Some of the clubs appear more than once (who needs a closed European Super League when most of the same teams qualify anyway?), so we’re only giving you nine minutes to get them all.

Let us know how you get on by tweeting us at @FourFourTwo, and tag in a Klopp-loving mate who thinks they could do better than your score.

QUIZ Can you name the highest-scoring Champions League players by A to Z?

WATCHPremier League live stream best VPN: how to watch every game from anywhere in the world