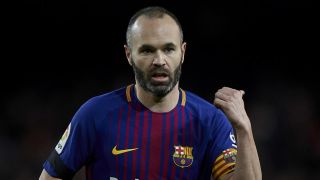 Fabregas will face his former team-mate and compatriot when the Catalans visit Stamford Bridge for the first leg of their Champions League last-16 tie on Tuesday.

Iniesta, 33, has been used with caution by head coach Ernesto Valverde, having only completed 90 minutes twice this season in all competitions.

The Spain star was substituted in the second half of Saturday's 2-0 LaLiga win at Eibar and is almost certain to start against Chelsea, with January signing Philippe Coutinho ineligible.

And Fabregas has no doubt Iniesta remains a fine player, especially as he has rarely had to rely on physical qualities in his career.

"Once you have a talent, once you have the class that he and so many other 'big' players have, they can play until their late 30s.

Asked if Iniesta was an idol for Fabregas as a Barca youth product, he replied: "You're making him very old! He's only three years older than me.

"We played with the Spain Under-21s together. We've played together from when I was 18 years old.

"I never saw him as an 'idol' because we always played together. I saw him as a team-mate. A person obviously that I admire, but in a different way from an idol I looked up to when I was young.

"I used to look up to [Pep] Guardiola because he was playing in my position; I used to love Luis Figo when he was at Barcelona. These two were probably the ones I looked up to most when I was little.