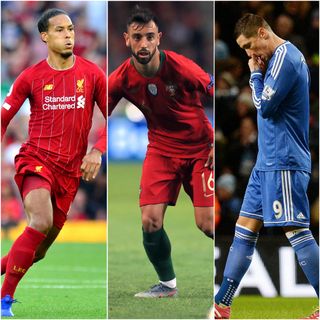 Manchester United have made Sporting Lisbon midfielder Bruno Fernandes one of the most expensive signings in the Premier League’s January transfer window.

The Portugal star is understood to have cost an initial £46.6million, ranking him sixth among January signings with the potential for add-ons to lift him even higher.

Here, the PA news agency looks at the month’s big-money deals – including several successes and one memorable flop.

The Dutchman’s fee was a world record for a defender, until beaten by Manchester United’s capture of Harry Maguire, but he has justified it by becoming Liverpool’s rock. He made himself popular from the outset with a debut winner against local rivals Everton in the FA Cup and has since been integral to the Reds’ Champions League win last season and their march towards a seemingly inevitable Premier League triumph this term. He is the reigning Premier League, PFA and UEFA player of the year and was runner up at the FIFA Best awards and the Ballon d’Or.

The American was immediately loaned back to Dortmund, instead arriving in the summer to provide much-needed new blood for a Chelsea side working under a transfer ban. He showed his immense potential with a run of five goals in three games in October and November including a hat-trick against Burnley, but has been limited by injuries since.

Arriving in the same window as Van Dijk, the Frenchman played his part as City won back-to-back league titles and a domestic treble last season. His influence has perhaps been even more apparent in his absence this season, with City looking defensively shaky without him as they have fallen 19 points behind Liverpool.

The Gunners’ record signing has 57 goals in 91 games for the club, moving ahead of Alexandre Lacazette as their key striker and forming an effective partnership with the France international when they play together. He has often captained the team this season and is a rare consistent presence in an under-achieving side.

This deadline-day move, and Andy Carroll’s linked move from Newcastle to replace the Spaniard at Anfield, became a case study in the dangers of over-spending in January. Torres scored just 43 goals in three and a half seasons with Chelsea, fewer than half of which came in the league, and his high-profile misses arguably live longer in the memory. Carroll, meanwhile, managed just 11 for Liverpool.

The midfielder comes with a goalscoring pedigree of his own – only two players, both strikers, have scored more in the Portuguese top flight since he arrived at Sporting in 2017. He has often been compared to Frank Lampard and if he can come close to the production of the former Chelsea star turned manager, United will be getting value for their significant investment.