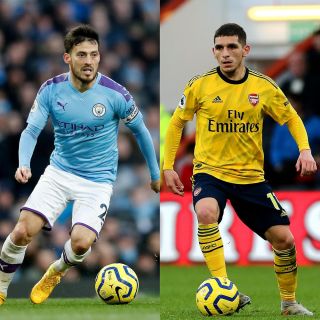 David Silva looks set to leave Manchester City for AC Milan, Corriere Dello Sport reports. The 34-year-old Spaniard has said he is leaving City when his contract runs out at the end of the season. Several clubs there are said to be interested in the Spain international, including Inter Milan and Roma, but AC Milan are believed to be the frontrunners.

AC Milan are also keen on signing Arsenal midfielder Lucas Torreira, Corriere Dello Sport reports. The 24-year-old Uruguayan joined the Gunners from Sampdoria in 2018, but reportedly could be making his way back to Italy with a price tag of around £35million.

Middlesbrough’s 16-year-old forward Calum Kavanagh has caught the interest of Arsenal, Chelsea and Celtic, the Sun reports. The Ireland Under-17s international has impressed with Boro’s under-18s this season, and while the club is keen to keep him they are reportedly set to start receiving some lucrative offers, with Leicester and Newcastle also interested.

Liverpool are interested in Lille midfielder Boubakary Soumare, according to Spanish website Sport. The Frenchman has shone in Ligue 1 this season and Liverpool boss Jurgen Klopp has reportedly been impressed. The 21-year-old would have a price tag of around £35million.

Liverpool are also interested in Sevilla centre-back Diego Carlos, Spain’s Marca reports. The 27-year-old Brazilian has been in strong form in LaLiga this season, and the paper claims he appeals to Klopp as a centre-back partner for Virgil Van Dijk. Real Madrid, Atletico Madrid and Barcelona are also rumoured to be interested.

Everton Soares: Could be on his way to, err, Everton, if the Toffees can find the funds to sign the 24-year-old Brazilian forward, who has a £104million release clause at Gremio, the Daily Mirror reports.

Alexis Sanchez: May still be going nowhere. On loan at Inter Milan, the Manchester United player is proving difficult to sell since he does not want to take a pay cut, according to the Evening Standard reports.