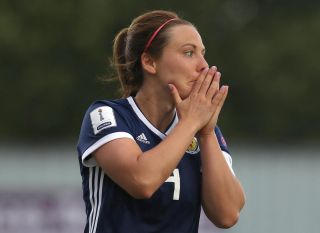 Scotland captain Rachel Corsie took a “huge gamble” that was alien to her nature when giving up her accountancy job to embark on life in full-time professional football in 2014.

The risk has long since paid off but she continues to cast her mind back to her biggest career decision as she prepares to lead Scotland into their first Women’s World Cup.

It was the type of bold move that is not uncommon among the careers of her Scotland team-mates, many of whom have had to weigh up similar life choices to pursue a career in the developing sphere of women’s football.

And Corsie believes that ambition and willingness to challenge themselves as individuals has been reflected in their progress as a team as they follow up their debut appearance at a major finals in Euro 2017.

The 29-year-old said: “It was a huge risk and to be honest, when I did it, I don’t think I even thought at that moment that this would be possible.

“I had a huge amount of support from colleagues at Ernst & Young, friends and family. It was a huge gamble and as an accountant you don’t normally take those risks. So it was very foreign to me, more so than others maybe.

“It’s paid off and I have learned so much along the way.

“It’s something that is always good to reflect on because it reminds you of the journey you have had, the things you have overcome and just the special opportunities that I have had that, if I had still been an accountant, I would perhaps never have been challenged in the ways I have.”

Corsie quickly took to full-time football, winning player of the year awards for County before leaving after one season in the FA Women’s Super League.

“Making that first move to go abroad was very challenging and something that took a long time to work out the right balance of work, the social environment and different cultures,” she said.

“But over time it has changed me enormously and opened my mind to so many things that perhaps I would have been closed off to before.

“You meet some incredible people, you come together in the same team and every single one of us has different stories, different backgrounds and different pathways to get to that place. It’s a special environment to be in a changing room like that. That’s something that means a lot to me.

Bowen plays a big ball ahead to Corsie, who flicks it on to A-Rod. What a combo by the #URFC side! #UTAvORLpic.twitter.com/cnF48dVC75— Utah Royals FC (@UtahRoyalsFC) July 14, 2018

“There’s now a number of players who are playing at top clubs where the expectation is to win every week. I think that’s a unique mentality that you can only practice by being in it.

“With the younger players, there is now an expectation that you can’t live in that bracket for too long.

“Once you are in the squad, you are there because you are good enough to be there and we hold everyone to the same standards and push one another every day we are together.

“The squad has developed from everyone’s individual ambitions and collectively we have that common goal. It’s a special group.”

"You just want to make everyone proud of what we can do." pic.twitter.com/GWkEY5pYZp— Utah Royals FC (@UtahRoyalsFC) May 15, 2019

Corsie’s Utah side currently top the National Women’s Soccer League table and she travels to France with a winning mentality.

As she prepares to lead Scotland out for their opening group game against England on June 9, she said: “That’s the greatest achievement.

“On the biggest stage possible, against one of your biggest rivals, is something that for me will be an extremely special moment as well as the whole team.

“We are in it together, we have a great group, and I think we have a huge amount of potential this tournament to do something really special.”