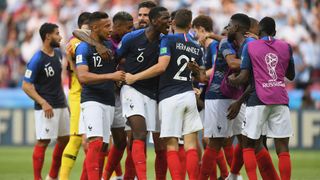 Patrick Vieira believes France's win over Argentina was the "defining game" they needed and will help them reach the World Cup final.

Didier Deschamps' men found some form in Russia with a thrilling 4-3 victory over Argentina in the last 16 on Saturday.

Kylian Mbappe scored a brace in a brilliant display, as France moved into a quarter-final meeting with Uruguay.

Vieira, who helped the nation win the 1998 World Cup and Euro 2000, feels the Argentina game was just what France needed.

"We can talk about their campaign in some different ways. Like everyone I guess, I was expecting more in terms of play," the Nice coach said on Monday.

"I think, however, that people were harsh toward the French national team. When you watch their game against Argentina, that bodes well for what's next. They needed a defining game and they got just that against Argentina. I think this team will be tough to beat.

"I sincerely hope they'll win it. After the last game you can see that the players get more confidence. They play more freely. That's what they were lacking.

"This game will help them to reach the final in my opinion."

This year marks the second straight World Cup at which France have reached the quarter-finals as they look to win the title for a second time.