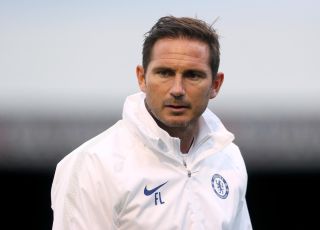 Chelsea manager Frank Lampard insists he does not need to strengthen his squad before the new Premier League season.

The Blues are banned from signing players during the next two transfer windows until the end of January 2020, but Lampard said on his side’s pre-season tour in Japan that he was happy with the squad he has got.

“I think I’ve inherited very good players,” the former Derby manager said on Sky Sports. “We can’t bring any players in, we know that – this year – but I don’t need new players.

“I’m very happy with the squad and determined for us to be successful.”

Chelsea’s appeal against a transfer embargo for breaching rules in relation to signing youth players was turned down by FIFA in May, but Lampard is focused solely on preparing his squad.

“I have to say, in the one week that we’ve been training, I’ve been very happy with the attitude and the qualities of the players.

“So my job now is to work hard in pre-season with them.

“I like my teams to play with a lot of energy, a lot of speed – with and without the ball, so if we lose the ball I want to win it back as quickly as we can.

“When we have the ball I want to move it quickly and create chances to win games and feel like we’re playing football we enjoy.”

Lampard said it was a “blessing in disguise” that the club would not be involved in the transfer window and that he was excited by the young talent at his disposal.

“Everybody knows I have a keen eye for the younger players that the academy has produced and we now have a batch of them who are fighting to get in the first team,” he said.

“But to be absolutely clear, they now have to make the difference. It’s a pathway that’s given to them and now they have to be the ones who play well enough to get into the team.

“I don’t care about age, I just care about performance and how people train. It’s up to those young players to show what they can do.”

Lampard confirmed he was keen to work with Callum Hudson-Odoi and was hopeful the England midfielder would sign a new deal, while defender Ethan Ampadu had not made the trip as he is likely to head out on loan.

Midfielder N’Golo Kante – recovering from a knee injury sustained at the end of last season – had been pencilled in to feature in one of Chelsea’s games in Japan, Lampard added.

Chelsea play J-League champions Kawasaki Frontale in Yokohama on Friday and then face Barcelona in Saitama next Tuesday.