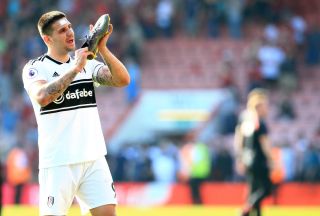 Scott Parker expects Fulham to do “everything they can” to keep hold of top scorer Aleksandar Mitrovic but admits it will be difficult following Premier League relegation.

Striker Mitrovic underlined his importance to the west London club by claiming his 11th league goal of a difficult season to earn Saturday’s 1-0 win at Bournemouth.

The Serbia international joined the Cottagers last term when they were playing in the Sky Bet Championship and fired them to promotion via the play-offs with 12 goals in 20 appearances.

Caretaker manager Parker believes it is crucial to retain the services of the 24-year-old as they prepare for an immediate return to the second tier.

“It will be vitally important really, he’s a top-class centre forward and I think you’ve seen that evident in the last two games,” said Parker.

“I know what the owners think, I know their ambition and certainly it is going to be a challenge.

“He’s a top-draw centre forward but at the same time I think that this football club we’ll be doing everything they can to keep a player like Alek.

“We’ve spoken about next year and the plans ahead and I think the main focus for Mitro is finishing the season like he has (on Saturday), a performance, the winning goal.”

The former England midfielder, whose temporary tenure began with five defeats in a row, has boosted his prospects of landing the role on a permanent basis after Saturday’s victory at the Vitality Stadium followed last weekend’s home win over Everton.

He is keen to remain at the helm and anticipates an imminent decision.

“I think it’s probably fair to say over the coming weeks now we’re coming towards the back end of the season,” he replied after being asked when he will learn his fate.

“There are going to be conversations to be had and we’ll see where we go from there.

“Next year’s going to be a massive year and I said at the start of it that I’ll treat it as a long-term project for me, and I know for sure whether I’m here or not I’ll leave the club in a better place than what it was.”

Bournemouth’s defeat means they have not won on home soil since thumping Chelsea 4-0 in January.

The mid-table Cherries received positive news ahead of the loss with 21-year-old winger David Brooks named on the shortlist for the Professional Footballers’ Association Young Player of the Year award.

Manager Eddie Howe believes there is plenty more to come from the Wales international and is unconcerned about potential interest from other clubs.

“I think he’s done brilliant things this season. I think he’s taken to the Premier League so well,” Howe said of Brooks.

“Technically he’s produced some excellent performances for us. I think the best is yet to come – he’s got a really good future if he continues to work hard and stay level-headed.”

Speaking about possible transfer bids for the former Sheffield United player, Howe said: “It’s not something that we’ve really thought about, to be honest.

“The transfer widow and losing players has not really been at the forefront of our thoughts.