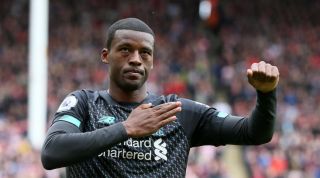 Georginio Wijnaldum believes Liverpool could have done a better job of protecting their lead against Tottenham on Saturday.

Jurgen Klopp's side moved 16 points clear at the top of the Premier League table thanks to Roberto Firmino's first-half strike in north London.

Spurs were second best in the first half but created several chances after the break and could have rescued a point with better finishing.

And Wijnaldum thinks Liverpool could have managed the game more effectively in the second period.

“[It was] really tough [physically] but also because I think we made it really tough for ourselves in the second half,” he told Liverpool's official website.

“I think first half we played a good game but we gave sniffs away and gave them a little bit of confidence.

"Because it was only 1-0, they had the confidence they could equalise and in the second half you know they will come out and try to equalise. That’s what makes it harder – and also because we didn’t do what we did in the first half.

“I think that was the reason why it was really tough. Normally, it’s always tough when you play against Tottenham but I think we made it tougher than what it was.

“It was only 1-0 so they had the confidence to try to score a goal. We had to do better with the situation. At the end we defended well but in a few bits in the game we gave chances away and we were lucky they didn’t score.

“It is [incredible],” Wijnaldum added on Liverpool's sizeable lead at the summit of the standings.

“But we also work really hard to keep this run going, we have a manager who keeps both our feet on the ground and to work even harder.