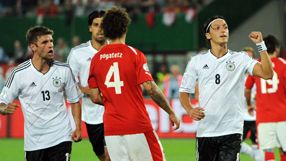 Each player will earn the same amount per participation as for the 2010 World Cup qualifiers but only if they book a spot in the 2014 showcase.

"I am happy with the speed and problem-free procedure that this agreement was reached," DFB President Wolfgang Niersbach said in a statement. "This shows the trust between the federation and the senior national team."

Germany have won both their Group C qualifiers so far and are favourites to add another six points when they take on Ireland and Sweden on Friday and next Tuesday respectively.

They had won all 10 of their Euro 2012 qualifiers for their best qualification for a major tournament.