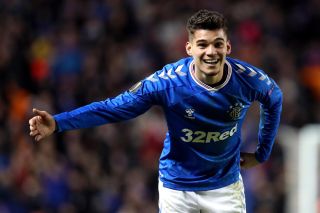 Rangers boss Steven Gerrard praised Ianis Hagi after watching him live up to the family name with a Europa League magic act.

The on-loan Genk attacker’s father, Romania great Gheorghe, was at Ibrox to see his son star for Gerrard’s team for the first time as they took on Braga.

And the 21-year-old did not let Hagi senior down as he produced a vital double which leaves Gerrard’s team dreaming of the last 16.

It appeared the Light Blues were set to slip to defeat on a woeful pitch as Brazilian skipper Fransergio and on-loan Barcelona striker Abel Ruiz tamed the blustery conditions to fire the Portuguese side two-up.

Hagi, however, refused to accept defeat and sparked the fightback which saw Gers claim a breathless 3-2 win as he scored either side of Joe Aribo’s equaliser.

His winning strike from a late deflected free-kick sparked jubilant scenes around Ibrox, with Gheorghe – back in Glasgow for the first time since playing for Galatasaray in a 2000 Champions League tie – joining in with the cheering from his seat in the directors’ box.

And Gerrard said: “Ianis is an outstanding talent and that stage was made for him.

“There was a lot of pressure on him, his dad was in the crowd tonight for the first time at Ibrox.

“He’s got fight in him. It’s not just talent, it’s fight. He wants to win.

“It was him who provided the magic and spark to get us back into the game. The first goal is outstanding – to cut in on his left foot, which I think is his weak one but I’m still not sure, was an outstanding finish.

“Then to have the audacity to try the second one from 30-odd yards out, to have the confidence. We got a bit of luck but sometimes in this game you have to make your own luck and he certainly deserved that.”

Gers have endured a miserable 2020 so far after dropping 10 points behind Celtic in the domestic title race.

But Gerrard hopes this win will provide the spark that reignites their campaign.

The former Liverpool skipper – no stranger to European comebacks as a player – added: “This is what Ibrox deserves. It’s what this club deserves with the amount of history and big nights there have been before.

“It is our responsibility to try to get as many of these nights back as we can.

“We saw some people leaving at 2-0. I’m not sure if that was the scoreline or the weather but there was a bit of negativity behind the bench, but in European football magical nights happen.

“I’ve experienced them as a player and I hope I experience a lot more. Tonight was right up there.

“We’ve beat a real good, dangerous team tonight. I thought Braga were outstanding at times tonight. They really had some success against us.

“But I’m really proud of my players. At 2-0 down, the character, the effort and the desire they’ve had to put in to turn that scoreline around was incredible.

“In the second half we rediscovered ourselves. That’s what I’ve been looking for from the team since we’ve come back from the winter break.”

There was frustration as Gers’ top scorer Alfredo Morelos picked up a booking which rules him out of next Wednesday’s return in Portugal.

And Gerrard said: “We don’t want to be missing players like Alfredo with the quality he’s got and the amount of goals – but it is what it is.

“No one in my dressing room is getting carried away. We know it’s only half-time, but what we’ve done tonight is put ourselves in a good position and now it’s about trying to finish the job off.”

Braga assistant boss Micael Sequeira believes they can salvage the tie next week.

He said: “It was a great game and we were fantastic in the first part. We could have made it 3-0 but Rangers then turned it around.

“Wednesday is a different game and we are still confident we can go through.”