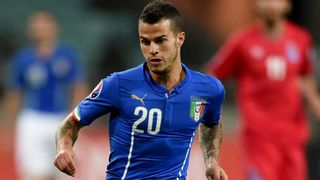 Sebastian Giovinco says he does not miss playing in Serie A and is happy with life at Toronto FC.

The Italy international made the switch from Juventus to MLS last year, signing a multi-million dollar, five-year deal with Toronto.

Giovinco went on to score 22 goals in 34 appearances, but the side was eliminated by fellow Canadian club Montreal in the knockout round of the MLS playoffs.

While the 28-year-old did not rule out a return to Europe in the future, Giovinco said he did not miss Italy at all.

"I’m very happy in Toronto, I’m happy with the choice I made," he told SportItalia. "I can’t wait to start again, we’ve been stopped for a few months and I want to get back to playing. Juventus? I miss it, but I made the choice and I’m delighted. I knew MLS was a growing league, and I wanted a change of lifestyle.

"Serie A? For now I don’t miss it, we’ll see in a couple of years, but at the moment I’m happy. I don’t know what will happen in the future, you can never say never in football. Football in MLS is growing, and in five or six years it will be an even more important league."

Giovinco featured as a substitute in Italy's recent Euro 2016 qualifiers, and the forward is confident he will be a part of Antonio Conte's plans in France.

"[Conte] has shown that distance isn’t a problem. I hope to go to the European Championships," he said.

"I didn’t believe it myself," he said. "It was true though, even if there was nothing concrete. A small approach, shall we say."