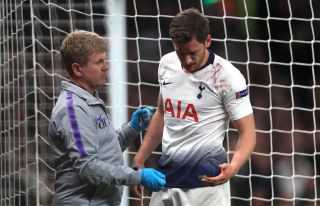 The game’s protocols around concussion are set to be addressed at the annual general meeting of the International Football Association Board (IFAB), football’s law-making body, in Belfast at the end of the month.

One draft proposal from the Premier League to the IFAB – seen by the PA news agency – is for the current three-minute assessment period to continue, with an additional permanent substitute permitted if the player is suspected of concussion during the assessment or at a later stage.

FIFPRO, the global players’ union, does not feel that does anywhere near enough to protect players.

“FIFPRO strongly believes doctors must be given enough time and space to assess a player with a suspected concussion in order to enable them to make the correct decision on whether he or she can stay on the pitch,” the union’s general secretary Jonas Baer-Hoffmann said.

“In our view, this means they must be provided with significantly more than three minutes.”

FIFPRO’s chief medical officer, Dr Vincent Gouttebarge, is part of an expert group which will make its recommendations to the IFAB concerning concussion.

The Football Association and FIFPRO are understood to favour a 10-minute assessment period, with a temporary substitute being introduced who stays on the field if the player suspected of having concussion is deemed unfit to return.

Both the Premier League and the FA are keen to trial any new protocol decided upon by IFAB next season, PA understands.

The Irish FA, which will host the IFAB AGM later this month, is understood to be meeting ahead of the AGM to discuss its favoured position on the subject.

The Premier League proposal offers a flow chart for how head injuries should be handled, which states that if “clear concussion symptoms evolve” after the initial three-minute assessment the player should be permanently replaced.