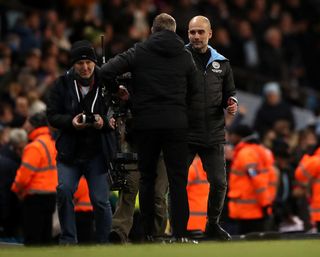 Three weeks after Manchester City won the first leg 3-1 at Old Trafford, Nemanja Matic scored – and was later sent off for a second bookable offence – in a 1-0 second-leg victory for Manchester United at the Etihad Stadium.

City progressed to a third successive Carabao Cup final with a 3-2 aggregate win on a night when video footage emerged of some home fans making airplane gestures in reference to the Munich air disaster ahead of the 62nd anniversary on February 6.

The PA news agency understands City are to check CCTV footage and blue seats appeared to be thrown after full-time as tempers frayed.

Asked about the incidents which came a day after United executive vice-chairman Ed Woodward’s house was attacked, City boss Guardiola said: “I don’t like it. I didn’t know it.

“I don’t like what happened with Ed Woodward at home because this is football.

“When you talk about what happened, I didn’t know it. If it would happen, that is not nice. Absolutely not.”

“I’ve just got to stand behind Pep there,” he said.

“You know, football is a game. It’s a game we should all enjoy – spectators, the ones who watch it on telly, the ones playing.

“I keep telling the players every time ‘go out with a big smile and enjoy yourselves’. Work hard, yes, and fans should always try to enjoy the games

“Yeah, we want rivalry but let’s keep it at a sane level and let’s make sure we eradicate that now.

“So, yeah, I stand behind Pep there and I think all of us do. We want to make this a nice game.”