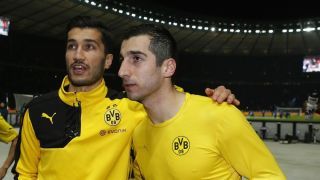 Borussia Dortmund announced at the weekend that Mkhitaryan will leave the Bundesliga side in favour of a move to Old Trafford and Gundogan has backed his former BVB team-mate to shine in the Premier League.

"Henrikh has been at Dortmund for three years. The first two years were not so easy for him, to be honest," Gundogan was quoted as saying by Manchester Evening News.

"He's a player who needs self-confidence, who needs to play every time and prove himself to get better and better. At this time, we were not so successful, so it was not easy for him to adapt. He had a few problems.

"But when you see how he played last year, it was really incredible. Maybe he was the most important player for us last year.

"If he can go on like this, he will have a big, big impact for Manchester United, and a big plus. I wish him the best, and to stay healthy."

Mkhitaryan, 27, is expected to complete his move to United in the upcoming days.