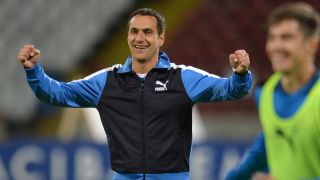 A row has erupted in Romania over the decision to crown Viitorul champions of Liga 1.

A 1-0 win over CFR Cluj secured a momentous title win for the club, which was founded in 2009 by Romania great Gheorghe Hagi.

They missed out on the title by virtue of their inferior head-to-head record during the play-off phase of the league, with Romanian football's governing body confirming the decision via their official website.

However, FCSB owner Gigi Becali has vowed to appeal to CAS, insisting that their better record during the league's first phase means the title is rightfully theirs.

"We're first, the four games [between the clubs] were in our favour," Becali said to Digi Sport.

"We're the champions, 100 per cent. We will go to CAS in Lausanne and they will give us the trophy."

But Hagi, who created Viitorul after an acrimonious departure from Steaua, says the club "don't know how to lose".

"I'm proud, happy, because this academy and this great team, these children, have fought with their last ounce of energy and achieved the impossible!" said Hagi, whose side is largely composed of academy players.

"Even though we know some are upset, we are happy. The big must behave like big men. They must know how to lose.

"We're the youngest champions in Europe. Now this city has entered the history of Romanian football. I've been investing in young people and that's one of my greatest qualities. I'm happy now that I did the right thing."

Viitorul's win came courtesy of a penalty from Gabriel Iancu, another former Steaua player, and capped what has been a remarkable rise in the last eight years.

Should their title triumph be ratified, they will enter the third qualifying round of the 2017-18 Champions League.

Posted by Liga Profesionista de Fotbal LPF on Saturday, 13 May 2017