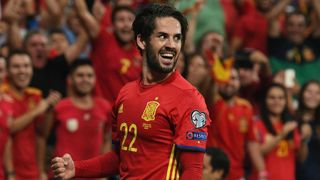 David De Gea feels Isco has the talent and personality to "become one of the greatest" after the Spain international made a flying start to the season for club and country.

The 2010 world champions are three points clear of the Azzurri with three matches remaining and can take another major step toward securing a place in the finals in Russia by beating Liechtenstein away on Tuesday.

Speaking to the media before that game, United goalkeeper De Gea claimed Isco's sparkling form of late is no accident.

"Personally I have known Isco for ages so it's no surprise for me what he's doing," he said.

"I have seen him doing incredible things for so long now so people shouldn't be surprised either.

"He's been performing at a high level and doing incredible things on the pitch for a while.

"He's at a top level and that's great for the team. We hope he keeps improving.

"Bearing in mind his personality, he'll become one of the greatest."

Barcelona's Sergio Busquets was on the wrong end of a masterclass from Isco and Madrid in a 3-1 Spanish Super Cup defeat at Camp Nou last month.

And the holding midfielder was reluctant to pick a favourite between the in-form 25-year-old and Blaugrana colleague Andres Iniesta.

"Personally I do not like comparing players," he said.

"No doubt they both are top-quality players but each one of them has their ways of interpreting football and also of playing, even though they might be similar.

"Isco has been showing in recent years his talent. He scored two goals [against Italy] and was outstanding.

"His role is getting more predominant within his team but we already knew what he was capable of.

"For us, having players like Isco or Andres that are able to use their skills and capabilities at the service of the team is a real pleasure."