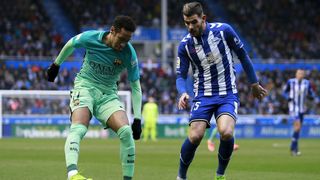 Theo Hernandez admits that he wants be part of "a great club" but is refusing to discuss rumours over his future until after the Copa del Rey final.

The 19-year-old has impressed while on loan at Deportivo Alaves from Atletico Madrid this season, prompting speculation linking him with Real Madrid, Barcelona and Liverpool.

Hernandez was reported to have passed a medical for Zinedine Zidane's side last week but his agent insisted that there was no agreement with any club over a transfer.

The full-back has lofty ambitions, however, he insists that his focus is on Alaves' Copa del Rey final against Barcelona next Saturday.

"Nobody thought that we would be where we are," he told Radio Marca. "I have to thank Alaves. I keep believing and working to be at a great club.

"I won't comment at all [on the rumours]. Our job is to try to win the final."

He continued: "We're very excited to play this final, both the team and the fans. We're going to try to win it.

"We're ready to defend against the players of Barcelona."

Hernandez has made 37 appearances in all competitions this season.