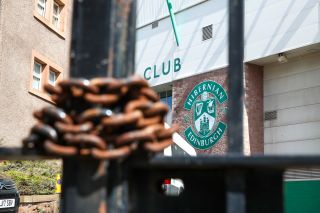 Hibernian chairman Ron Gordon signalled they would add to the squad despite opening talks over potential wage and jobs cuts with players and other staff.

Hibs last week warned of tough choices after forecasting their income would be halved next season as a result of the coronavirus pandemic.

But Gordon has stressed Hibs will still be focused on improving their team.

In an interview with Hibs TV, the United States-based businessman said: “In the conversations we have had, there are two very big pillars on which we need to manage through this.

“So part of what we are doing is just focus on the first team and wherever we see opportunities to improve the team, I think we are going to take them.”

Gordon praised the attitude of the players during financial discussions.

“The players have been magnificent,” he said. “When we asked them for a deferral which helped our cash position significantly, they all stepped up, which speaks to the spirit that exists at the club.

“The players are a critical part of that because their contribution to the financial health of the club is very important, so I don’t think we can address our cost structure without having a conversation with the players.

“As they have in the past, I’m sure the players will see the ways in which they can contribute and help the club shore itself.”

Gordon added: “Our goal is to navigate this storm as quickly and effectively as we can so that we come out of it when the sun begins to shine again in a way that we can rebuild very quickly and put the club in a competitive position as a business and as a football team.

“You have to make some difficult decisions and unfortunately the club needs to contract a little bit to the reality, which is loss of revenue and uncertain times for football over the next three, four, six months, who knows when we can have 20,000 supporters at Easter Road?”