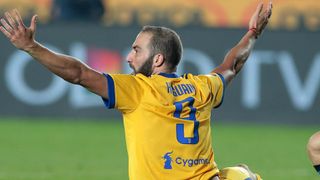 Juventus boss Massimiliano Allegri says he gets angry with Gonzalo Higuain as the striker only does around half of what he is capable of.

Higuain – signed from Napoli for €90million last year –  has scored in each of his last two appearances, but has been outshone by fellow forward Paulo Dybala, who already has 12 goals this season.

Allegri acknowledges the 29-year-old scores crucial goals for Juve, but still has frustrations over his overall production.

"Gonzalo has to be more decisive," Allegri told Tuttosport.

"Higuain is an extraordinary player, I get angry with him a lot because I demand more, because he can do much more.

"No matter whether he gets 25 or 30 goals, the important thing is that they are decisive goals. He's better physically, he's worked over the international break, but he's still not at 100 per cent."

Allegri found it hard to decide whether in-form Dybala was the best player he had coached.

He continued: "Comparing is always difficult all players are different. I was lucky enough to coach Andrea Pirlo who, playing in a different role, was hugely talented.

"Ronaldinho was something out of the ordinary. Once, playing against Barcelona, the Camp Nou applauded him for 10 minutes.

"Then I had [Antonio] Cassano, Robinho and [Zlatan] Ibrahimovic, who was talented in his own way, different from the others.

"Dybala is 23, he still has to grow a lot. He has changed a lot physically [since last year]. He needs to learn how to handle games, as he can have a little less energy in certain matches and he has to improve his right foot too."