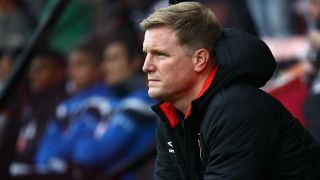 Bournemouth manager Eddie Howe said he disagreed with Asmir Begovic's assessment of Liverpool, revealing he spoke to his goalkeeper about the criticism.

Speaking on Sky Sports in October, Begovic slammed Liverpool's defending, saying they were failing at the basics.

Howe, whose team hosts Liverpool on Sunday, said he discussed the criticism with the Bosnia-Herzegovina international.

"Asmir and I did speak about it," Howe said, via the Bournemouth Daily Echo.

"I think that was the right thing to do from my perspective, just to say to all my squad I don't think we should be airing our views on opponents, certainly not before games and possibly not even after.

"From a players' perspective, I don't think you ever want to see anyone say anything negative towards any other team in the Premier League.

“We are all competing and all trying to do the same thing and I think it is very important we all show respect for each other.

"I think Asmir was put in a situation in which he was on a programme where he was asked his opinion and every person has the right to give their opinion."

Ahead of the visit of sixth-placed Liverpool, Bournemouth are 16th in the Premier League, just a point clear of the relegation zone.

Asked if he agreed with Begovic, Howe said: "Personally, no. That is my opinion."