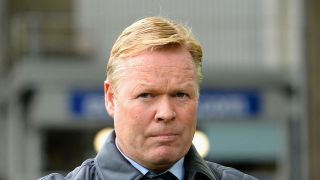 Ronald Koeman knew he was in danger of being sacked by Everton, with the club's failure to adequately replace star striker Romelu Lukaku among the reasons for his dismissal.

Koeman departed Goodison Park on Monday, the day after a 5-2 thumping at home to Arsenal left his side in the relegation zone, having recorded just two wins from their first nine Premier League games.

Although Everton spent heavily on the likes of Jordan Pickford, Michael Keane, Gylfi Sigurdsson and Davy Klaassen during the transfer window, attacking arrivals Wayne Rooney and Sandro Ramirez could not fill Lukaku's boots.

Koeman had tried to persuade Arsenal forward Olivier Giroud to join Everton, while winger Nikola Vlasic confirmed he could not choose his preferred number 19 shirt as the club was holding it in the hope Diego Costa would sign.

Ultimately it was substandard results that cost Koeman his job and the Dutchman accepted his days were numbered after a home loss to Lyon in the Europa League, when tempers ran high among the Everton fans.

"Last Thursday, after our defeat to Lyon in the Europa League, I knew it was crisis time," Koeman told Dutch football magazine VI. "I am not daft, I know how the football world operates.

"I could figure out how things could go. I was sure I would be on the bench against Arsenal on Sunday. But another defeat against Arsenal and I could see that anything would happen.

"And if things did not improve in those last games, I had worked out what would happen.

"Maybe there was a chance to coach against Chelsea in the EFL Cup and maybe I would be able to do Leicester City away and Watford just before the international break."

Giroud has not started any Premier League games for Arsenal this season and Koeman cited the Frenchman's decision to reject a move to Everton as key in his side's failure this term.

"I had Olivier Giroud in the building," Koeman added. "He would have fitted perfectly, but at the very last moment he decided that he'd rather live in London and stay at Arsenal.

"That was really hard to swallow. You tell me, where you can get a better striker? Lukaku was so important for us, not just because of his goals. He had a certain way of playing as a striker - strong.

"He could hold the ball, he always had an eye for the goal, he was fast. If things were not going well in a game, if we could not play the way we were used to, there was always the option to use the long ball towards him.

"All of a sudden [after Giroud's decision], we were missing such a player. With Nikola Vlasic and Wayne Rooney, we had attackers who want the ball at their feet.

"When you are struggling as a team with the build-up from the back, and we no longer had the option to kick it long, you know you have a problem."