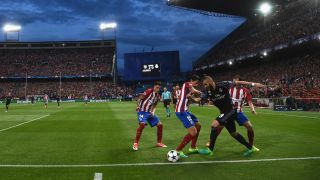 Zinedine Zidane was left in awe of Karim Benzema's brilliant piece of skill that helped Real Madrid to reach the Champions League final at the expense of Atletico Madrid on Wednesday.

Diego Simeone's side scored twice in the first 16 minutes through Saul Niguez and Antoine Griezmann to threaten a remarkable comeback at Vicente Calderon, after they lost the first leg 3-0.

However, Isco prodded in an away goal shortly before half-time that effectively killed the tie and, although the game finished 2-1, Madrid progressed 4-2 on aggregate.

Benzema produced a moment of magic in the build-up to Madrid's goal, skipping beyond three Atleti defenders in a confined space before cutting the ball back to Toni Kroos, who saw a shot saved by Jan Oblak before Isco turned in the rebound.

The striker has found consistent form hard to come by this term and has been targeted by some sections of the Madrid support during a run of eight matches in all competitions without a goal.

Zidane, however, was delighted with his contribution, saying afterwards: "I don't know how Benzema got out of there, but... in football it's not only about the goals. He has his goals but also he has things for the others... that's essential.

"I'm pleased with his performance. He was only lacking a goal, he had chances. We can be happy with the performance of the whole squad."

Zidane, who could become the first head coach to guide a team to a successful Champions League defence, believes Madrid fully deserved to progress.

"We're very happy to reach the final again. Everyone deserves it, above all the players, who have worked so hard until now. It's deserved," he said.

"We're going to have time to prepare for the final but we can say that we're happy for what we've done.

"We had difficulties at the start, they scored two goals, but I didn't have to worry. I knew that we were going to have chances. In the second half we played better, with Isco between the lines, Benzema... We had chances to score more.

Madrid face Juventus in the final in Cardiff on June 3.