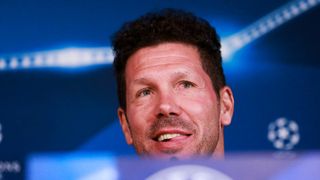 Diego Simeone has decided who will play at right-back for Atletico Madrid in their Champions League semi-final against Real Madrid, with the club suffering a defensive injury crisis.

Atletico already had problems at the back with Juanfran and Sime Vrsaljko ruled out of the derby, but on Sunday it was confirmed Jose Gimenez will not be available either, due to an adductor injury.

Gimenez has filled in at right-back for Atleti of late, but after the 22-year-old was hurt in a challenge with Kevin-Prince Boateng during his team's 5-0 win over Las Palmas, Simeone will need to find a new solution.

Montenegro international Stefan Savic could move across from centre-back, while Simeone may instead turn to midfielder Thomas Partey or Lucas Hernandez, who signed a long-term contract on Monday, with the Argentine boss claiming to have made his decision.

"I imagine it will be a complex match," Simeone told reporters. "But I'm very clear on who's going to play on the right side.

"Absences are important because none of those who play in that position have done it, but I also understand that football is a team game."

Simeone hailed the work of his opposite number Zinedine Zidane, who is looking to defend the Champions League title he won against Atleti in Milan last season.

"I see a match in which they make a strong start. They will try to hurt us in the first minutes with the intensity of their players. We will have to take the match to where we feel more comfortable.

"Two very big teams are going to play each other. It won't be easy to referee. I hope that on Tuesday the referee goes unnoticed, it will be the best for everyone."