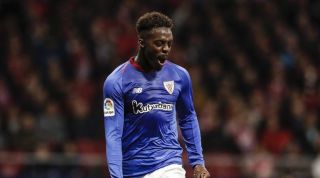 Williams was linked with a move to Manchester United before the Premier League's transfer window closed on Thursday.

Ole Gunnar Solskjaer was reportedly weighing up an offer for the 25-year-old, who he earmarked as a potential replacement for Inter-bound Romelu Lukaku.

However, United's hopes of landing Williams in January or next summer have been harmed by his decision to extend his deal in the Basque Country.

The forward has committed his future to Athletic by signing a contract which runs until 2028.

Williams' release clause has also risen to £125m, potentially putting him out of the reach of the Red Devils.