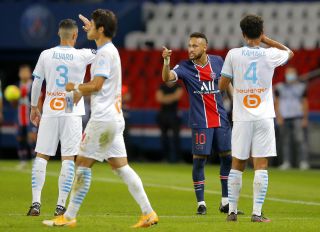 Disciplinary chiefs have launched an investigation into Neymar’s allegation that he was racially abused by Marseille defender Alvaro Gonzalez.

Neymar was one of five men sent off following an ugly brawl at the end of Paris St Germain’s 1-0 Ligue 1 defeat at the Parc des Princes on Sunday, and later alleged he had been the subject of racism, an accusation Gonzalez swiftly denied.

A disciplinary commission statement said: “Regarding the case of Alvaro Gonzalez, in view of the nature of the facts, the commission decided to place the case under investigation.”

Trouble flared in stoppage time after Leandro Paredes had pushed Dario Benedetto, sparking a fracas during which Layvin Kurzawa raised a boot at an opponent.

Kurzawa and Paredes, who had already been cautioned, were both dismissed, as were Marseille pair Jordan Amavi and, also for a second bookable offence, Benedetto.

Neymar followed after a VAR review showed him aiming a punch at the back of Gonzalez’s head.

Kurzawa has been handed a six-match ban and Amavi three, while Neymar and Paredes will both sit out two games with a third suspended. Benedetto’s punishment is a single match on the sidelines.

In addition, PSG’s Angel Di Maria has been summoned to appear before the disciplinary commission on September 23.

The Argentina international at least had some better news on Wednesday evening when he helped his club record a first Ligue 1 victory of the season at the third attempt, although that too was not without incident.

Julian Draxler’s injury-time header proved enough to hand Thomas Tuchel’s men a 1-0 home win over Metz on a night when they were severely depleted by both the fall-out from the brawl and a series of positive coronavirus tests.

They did not help themselves either when defender Abdou Diallo was dismissed for a second bookable offence with 25 minutes still to play.

With Neymar, Kurzawa and Paredes all suspended and Kylian Mbappe still missing after testing positive for Covid-19 while on international duty with France, Tuchel was forced to dig deep into his resources.

However, Germany international midfielder Draxler turned up on cue to snatch victory deep into added time, in the process dragging his club out of the bottom three.