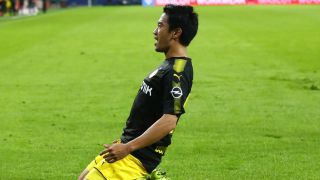 Two late goals secured a 2-0 victory for Borussia Dortmund as they dominated Fortuna Dusseldorf in a friendly clash on Saturday.

Peter Stoger's men controlled possession throughout in La Linea de la Concepcion in southern Spain but left it until the 71st minute to open the scoring through substitute Alexander Isak.

The 18-year-old was on hand to apply the finish after an Andriy Yarmolenko strike deflected into his path, and it was the Ukraine international who provided the assist for the second.

Yarmolenko showed composure on the right side of the box to get the better of his marker and square the ball for Shinji Kagawa to tap home with six minutes remaining.

Pierre-Emerick Aubameyang did not feature amid reports the striker has agreed a move to Guangzhou Evergrande, although his absence was put down to his late arrival on Friday after attending the African Footballer of the Year ceremony.

One positive for Dortmund was the return of Erik Durm, who has not featured this season due to a hip injury but came on as a second-half substitute.