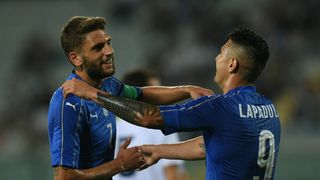 AC Milan forward Gianluca Lapadula netted a hat-trick as an experimental Italy side ran out 8-0 winners over minnows San Marino in Empoli.

Juventus' presence in Saturday's Champions League final deprived Azzurri boss Giampiero Ventura of a number of his leading stars but the XI he sent out ensured those in attendance at the Stadio Carlo Castellani would be regularly checking their teamsheets.

Lapadula was one of nine debutants in the starting line-up, captained by Sassuolo forward Domenico Berardi on his maiden appearance.

Berardi set-up the opener for Lapadula and the fourth, starting and ending an early goal-rush as Crotone defender Gianmarco Ferrari and Atalanta striker Andrea Petagna – a comparative one-cap veteran among his colleagues – got in on the act.

Lapadula secured his treble in between more debut goals for Mattia Caldara and substitute Matteo Politano.

An own goal from San Marino replacement Giovanni Bonini completed the scoring, with Italy's attentions turning towards what should be a considerably more taxing assignment against Uruguay next week.

Ferrari grappled with Michele Cevoli to nod in number two from Federico Chiesa's corner and a wretched spell for the visitors continued when Petagna made it three – Lapadula having been played carelessly onside before his cut-back was defended terribly.

Lapadula made it four goals in the space of nine minutes, with Berardi sliding through a pass for a pleasing dinked finish.

The over-worked Benedettini did well to push Chiesa's shot around the post a minute before half-time but his misery continued early in the second period.

Though obviously out-classed across the field, it was hard to sympathise with San Marino's lackadaisical approach to set-piece defending by the time Caldara was left unmarked to slam in the fifth in the 48th minute.

Less than a minute later, Lapadula completed his hat-trick in style by lobbing in from the edge of the box as Benedettini advanced.

Politano, one of four half-time replacements, got in on the act with a similarly stylish strike before the hour – collecting a poor clearance to loop the ball over Benedettini into his right corner.

The unfortunate Bonini swiped Politano's low cross past his own keeper to complete the scoring in a match Ventura will hope offers a good omen for tackling the similarly unheralded Liechtenstein in Italy's final World Cup qualifier of the season.