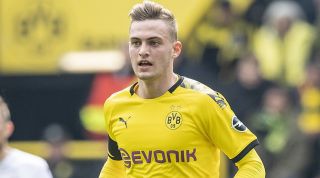 Manchester United, Liverpool and Arsenal could all battle it out for the signature of Borussia Dortmund forward Jacob Bruun Larsen, write The Sun.

The Denmark international was a key figure in BVB's Bundesliga title tilt last term, making 24 apperances as Lucien Favre's side missed out on the prize by two points.

However, Dortmund are prioritising the retention of Jadon Sancho and could allow his fellow winger to depart for the right price.

Liverpool boss Jurgen Klopp was in charge of the German outfit when they acquire Larsen from Lyngby in 2015.

He will attempt to sign the 20-year-old for a second time this summer, but Arsenal and United are also hopeful of completing a deal.

Both Unai Emery and Ole Gunnar Solskjaer want to add to their attacking options ahead of next season.