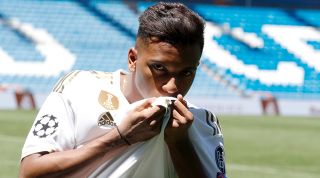 Funnily enough, Traore was rather pleased to get out of Middlesbrough and join Wolves last summer. It was goodbye Tony Pulis and the Championship; hello Nuno Espirito Santo and the Premier League as the former Barcelona prodigy helped his new side to a seventh-placed finish in their first season after promotion.

Generally his displays were what we have come to expect from him, mind – the complete unexpected. He made 29 appearances but only eight of those were starts, and it seems highly unlikely that he'll be getting a Spain call-up anytime soon. His parents are Malian, however, which could open up a new international avenue at some point.

Now going into his third season at Vicarage Road following a club record move, Gray is yet to really get off the ground in north London. He's managed only five and seven goals respectively in his two Premier League campaigns with Watford so far, and will be hoping for much more in 2019/20.

It's unfortunate for Dalot that Portugal are blessed with some handy right-backs at the moment: Barcelona's Nelson Semedo made their Nations League squad, but Leicester's Ricardo Pereira and Southampton man Cedric Soares are also in competition for places. But if his promising debut campaign at Manchester United is anything to go by, the 20-year-old will get his chance sooner rather than later.

Dalot was eased in by Jose Mourinho and Ole Gunnar Solskjaer, but should play a bigger role next season if United struggle to bring in more firepower in wide areas. He'll have Aaron Wan-Bissaka for competition at right-back but is probably more likely to play a little further ahead anyway.

Four days after a 1-1 draw with Tottenham led to Saints slipping into the Premier League relegation zone in January 2018, they broke their transfer record to acquire Monaco striker Carrillo for £19.1m. The uncapped Argentine hadn’t exactly pulled up trees in the principality, and it didn’t take long for Saints supporters to realise the signing wasn’t going to be a success.

Currently on loan at Leganes – managed by former Southampton boss Mauricio Pellegrino – Carrillo is unlikely to ever usurp the likes of Sergio Aguero, Gonzalo Higuain and Mauro Icardi in his country’s centre-forward pecking order. 'Unlikely' being 'has absolutely no chance'.

Maddison can count himself unfortunate to still be on this list, having been rewarded for a terrific debut season at Leicester with a call-up under Gareth Southgate last season. In the end he'd proved himself as one of the most productive midfielders in the league, notching seven goals and assists apiece.

But Southgate is yet to be fully convinced that he can squeeze the ex-Norwich man into his team. Maddison is traditionally a No.10 but Leicester manager Brendan Rodgers played him a little deeper last season – which could finally open the door for his first Three Lions appearance. He'd deserve it.

West Ham splashed the cash last summer, spending £99m on new recruits to usher in a new era under Manuel Pellegrini at the London Stadium. Diop was their second-priciest purchase at £22m, but unlike the £36m Felipe Anderson, the French defender has never represented his country at senior level.

The 22-year-old has time on his side but huge competition with Les Bleus: Raphael Varane, Clement Lenglet, Kurt Zouma, Dayot Upamecano and Samuel Umtiti are just a few of the stoppers vying for places. Diop has played for France at every youth level since the U16s, and will hope to make the final step in the next year.

Hernandez crossed the Spanish capital in 2017, swapping Atletico Madrid for Real Madrid before he’d made a single first-team appearance for the Colchoneros. The left-back featured in 23 games for Zinedine Zidane’s side in 2017/18, before agreeing a loan move to Real Sociedad for the 2018/19 campaign.

A three-time France U20 international, the youngster will have to compete with older brother Lucas for a place in the senior squad – not to mention Benjamin and Ferland Mendy, plus Lucas Digne. Good luck to him.

After a successful first season in Germany with Mainz in 2017/18, Diallo earned himself a £24.8m move to Borussia Dortmund. The central defender, bought as a replacement for Arsenal’s Sokratis Papastathopoulos, is BVB’s second-most expensive signing of all time, ahead of Henrikh Mkhitaryan, Marcio Amoroso and Andriy Yarmolenko, and behind only Andre Schurrle.

Diallo’s future international prospects look promising: he was captain of France’s U21 side and previously played for five different age-group teams. Born to a Senegalese father, the centre-back could even switch allegiance if a Bleus call-up isn’t forthcoming.

Modeste was linked with a host of Premier League clubs after scoring 25 Bundesliga goals for Cologne in 2016/17, but no English outfit could match the financial package offered by Tianjin Quanjian. Initially signed on a loan deal, Modeste made the move permanent for £31.3m at the end of the 2017 Chinese Super League season.

In August 2018 he went AWOL, got a return to Cologne and both parties sued each other. A happy ending.

Malcom was on the verge of joining Roma last summer, with excited Giallorossi supporters even gathering at the airport to welcome the Brazilian to Italy. Barcelona intervened at the last minute, though, paying £36.5m to bring the Bordeaux forward to the Camp Nou – much to the dismay of then-Roma sporting director Monchi, who threatened legal action.

Malcom struggled for kicks with the La Liga champions in his debut season, starting only six league games and none in the Champions League, and an early exit was mooted long ago. That might depend on how serious the Catalans are about bringing back Neymar.

When heavily linked with a transfer to Liverpool, Teixeira instead left Shakhtar Donetsk for Jiangsu Suning in January 2016, as the Chinese side splashed £38.5m on his signature. Not only did that move take the forward away from Europe in his mid-20s, it also damaged his chances of earning a first Brazil call-up.

Playing in China didn't prevent Paulinho and Renato Augusto from appearing for the Seleção, but – unlike Teixeira – the midfield pair were already established in the national team setup before their moves to Asia.

Born in July 2000, Vinicius was just 16 years old when Real Madrid agreed a £38.7m deal to bring him to the Spanish capital on his 18th birthday. When the agreement was struck, the Flamengo forward hadn’t even played for Brazil’s U20s, although he did star as the Seleção won the U15 South American Championship in 2015, and the U17 equivalent two years later.

Vinicius made a hugely impressive breakthrough at Madrid last season, gaining invaluable experience in a miserable campaign for Los Blancos, but now has Eden Hazard for competition.

A year on from Vinicius came an agreement for Rodrygo – wanted by Barcelona, Liverpool and PSG but a sucker to the charms of the Bernabeu. He arrives this summer after spending another year at Santos, and handily still owns 20% of his own transfer rights. Ker-ching indeed.

The electric 18-year-old was sponsored by Nike aged 11 and given a hero's send-off by Santos before being officially unveiled by Madrid earlier this month. Most likely, he'll train with Los Blancos' first team but turn out more frequently for the Castilla in 2019/20.

Riyad Mahrez became Manchester City’s record signing when he joined the Premier League champions from Leicester last summer, pushing January arrival Laporte into second place. Yet while the Algerian has pulled on his country’s shirt 47 times and counting, his team-mate has yet to win a senior international cap.

Eligible for both France and Spain, the defender has represented the former at U17, U18, U19 and U21 level without ever turning out for the senior side. It's not because of ability.