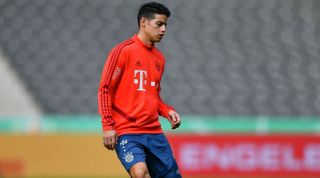 The Real Madrid loanee has spent two years in Munich, but is now looking for a new challenge.

According to the Mirror, there was a suggestion that Bayern Munich could buy James for the agreed £37m and then try to sell him for a profit.

However, the Bayern chairmain Karl-Heinz Rummenigge has ruled out anything of the sort.

"That’s not the style of Bayern," Rummenigge told press. "We don’t want to do human trafficking, to push something elsewhere to make some money. FC Bayern has never been that way.

The door is now open for interested clubs to move for the Colombian.

Arsenal see James as a good fit to replace Aaron Ramsey, who will join Juventus on a free transfer this summer, while Liverpool are still looking to replace Philippe Coutinho.

The 27-year-old scored 15 goals and assisted 20 as Bayern won the domestic league and cup double this season.