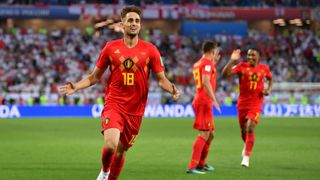 Maybe Belgium did not want to win Group G. Maybe Adnan Januzaj's glorious goal was more of a welcome sight to England fans than to his own compatriots. But, for the sake of the tournament, thank goodness it came along.

The game that had looked not only the pick of the group but perhaps the best of the World Cup early round as a whole had strayed perilously close to the border of farce until Januzaj came along.

The fear of winning the group only to face the prospect of a quarter-final with Brazil was genuine, for both teams. It was clear among the fans both in Kaliningrad and on social media back at home. It was underlined by the selections of Gareth Southgate and Roberto Martinez, who made 17 changes between them, the most recorded in a World Cup match since 1966. England failed to come up with a shot on target in the first half, just in case we didn't get the message.

Ignoring, if it's possible, the debate about the wisdom of cherry-picking the route through the knockouts by teams who have not reached a semi-final between them since 1990, this was a match worth winning. Or, at least, trying to win. There are fringe players in each team who had a legitimate case for a spot in the starting XI in the next round, and who had before them a terrific opportunity to give their coaches a selection dilemma by performing well.

There are plenty who didn't. In fact, there are too many to list. Januzaj did.

0 - This is the first time in 15 appearances at the World Cup that England have failed to keep a clean sheet in the first round group stages. Leaked. June 28, 2018

The former Manchester United man was a surprise inclusion in Martinez's star-studded 23-man squad for Russia. He only has nine caps to his name, including one from today, and had never scored for his national team before. His recent seasons at club level have been dominated by frustration at United, misery at Borussia Dortmund, and little more than encouraging signs at Real Sociedad.

And yet, given the chance to impress here, he took it. Whether or not the rest of Belgium's players really did want to avoid a victory is hard to say, but it's impossible to make that accusation about Januzaj.  He had four shots in total, more than anyone else except Marcus Rashford, and contested more duels than attacking partners Michy Batshuayi or Thorgan Hazard. His sole contribution to the World Cup before today was being wiped out by Kevin De Bruyne in training, and he was not prepared to accept his lot.

It still looked likely that we'd be heading for a stalemate, though, until six minutes after the restart. Januzaj collected Youri Tielemans' pass, shifted the ball back and forth in front of Danny Rose to leave the Tottenham defender totally nonplussed, and bent a stunning shot over and beyond the hand of Jordan Pickford. It was exquisite skill, worthy of a World Cup match, and even brought a Zinedine Zidane-esque hand-wring of a celebration out of Martinez, a rueful acceptance that it was a moment to appreciate, even if he would have preferred to see the ball sail over the bar.

It meant, too, that this will be a game remembered for a quality piece of football, and not just the peculiar pre-match machinations. We should all thank Januzaj for that.