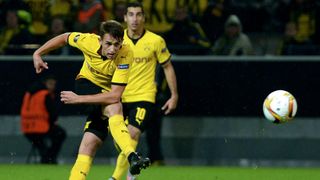 Adnan Januzaj has been recalled to Manchester United from a disappointing loan spell with Borussia Dortmund.

The Belgium international managed just 12 appearances for the Bundesliga side after sealing a season-long switch to Signal Iduna Park at the end of August.

Louis van Gaal has repeatedly stressed a desire to bolster his attacking options with more pacey wide players and has now opted to bring Januzaj back into the United fold.

"#mufc confirms Adnan Januzaj will rejoin the squad, after Borussia Dortmund agreed to cancel his loan deal," the club stated via Twitter on Thursday.

The 20-year-old is set to spend the remainder of the season at Old Trafford as he would be ineligible to join another side on loan, having already played for two clubs in 2015-16.