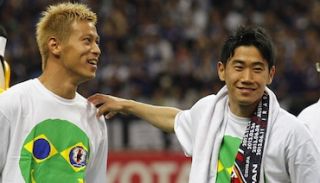 Iraq held Japan to a 2-2 draw in the Qatari capital 20 years ago in a game that denied the Japanese a place at the 1994 World Cup and was dubbed the "Agony of Doha" by the country's media.

Two decades on, it is Group B basement dwellers Iraq who must beat Japan in Doha to give themselves any realistic chance of qualifying for Brazil next year.

Japan are unlikely to show any sympathy, however, particularly with the Confederations Cup on the horizon.

"In Japanese football history, this is a place we can't ever forget," Kyodo News quoted Shinji Kagawa as saying. "But we are taking the necessary steps to move on toward the future."

Keisuke Honda, whose injury-time penalty sealed Japan's World Cup finals spot, has been unable to train due to a thigh injury and Manchester United's Kagawa could take over the playmaker role.

"Wherever I play, I will be ready," added Kagawa. "It's really important for us to win and I hope we can finish the qualifying campaign on a high note before going to the Confederations Cup."

Honda has been a vital cog in the Japan midfield and manager Alberto Zaccheroni was non-committal about the CSKA Moscow player's chances of featuring in Tuesday's match.

"He hasn't played a whole lot recently so he is in need of some fine-tuning," Zaccheroni said. "Whatever playing time he can give me, I need to use it wisely.

"I don't think we've played as poorly as some say without Honda. Honda is an important player to us, but we do have people who can step up and fill in."

Japan took one of Group B's two automatic qualification spots but all four remaining teams - Iraq, Australia, Jordan and Oman - are in the running for the second berth.

Oman are second on nine points from seven games, while Australia and Jordan are on seven having played a game less. Iraq have five points with two games to play.

Bottom side Iraq have to win on Tuesday to keep alive their hopes before they travel to Australia for their final match on June 18.

"This is the last chance for Iraq to qualify for the World Cup and we will give it whatever we have," Iraq coach Vladimir Petrovic said.

"We respect Japan as the best side in Asia but we still plan on beating them."

The Socceroos face Jordan in Melbourne on Tuesday. The final round of group matches sees Australia host Iraq while Oman visit Jordan.