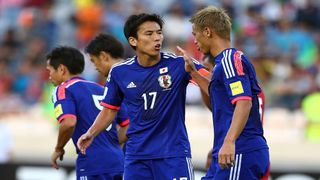 The Blue Samurai led 2-0 in their Round of 16 fixture with Belgium before the Europeans launched a dramatic comeback to win 3-2 with a late Nacer Chadli goal.

Honda did not start a game in Russia, but came off the bench as a second half substitute in Rostov, and believes the future is bright for Japan.

"Today we showed how we can proceed as Japanese football," said the 32-year-old, who scored 37 goals in 98 caps.

Thank you my World Cup and my dream. You raised me up until today.July 3, 2018

"I am happy, because we have a lot of good young players, and now it is their turn to write the history of Japanese football.

"This is the last World Cup for me. That's the reality. To be perfectly honest, I wanted to take everyone to the next round, but I couldn't get the job done. I did everything I could. I did the best I could.

Japan captain Hasebe also called time on his international career after 114 appearances and the Eintracht Frankfurt midfielder praised the team-mates who supported him during his career.

"I would like to express my gratitude to my colleagues who fought together for about 12-and-a-half years since 2006, and to all the Japanese people who supported me so much," he said.

"The time I walked with you is an important treasure for me. Thank you from the bottom of my heart.

Japan will now look ahead to the 2019 Asian Cup, which is being held in the UAE.