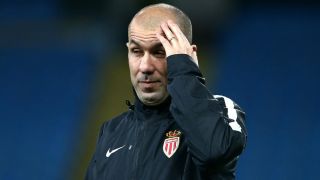 Leonardo Jardim said a draw would have been a fair result for Monaco after the Ligue 1 champions suffered a last-gasp loss to Lyon.

Monaco were beaten 3-2 on Friday after Nabil Fekir scored a dramatic stoppage-time winner as hosts Lyon triumphed in a pulsating encounter.

Fekir struck in the fifth minute of added time with a fine free-kick after Monaco had twice equalised via Adama Traore and Rony Lopes, who cancelled out goals from the former and Mariano Diaz.

While disappointed with the result, head coach Jardim was encouraged by the performances of his young Monaco players at Parc OL.

"It was a very balanced match. We had defensive difficulties in the first half. After half-time, we managed the game better," Jardim said.

"A draw would have been more justified. At the start of the game, our right side had difficulty under pressure from the opponent. We managed to stabilise the situation.

"I think our team have shown that they have solutions, that our young players work, like Adama Traore, Rony Lopes, Keita Balde: they delivered a very positive match, as [Soualiho] Meite. This is important for the present and for the future."

Monaco goalkeeper Danijel Subasic claimed responsibility for Lyon's winning goal after he was unable to keep out Fekir's set-piece.

"For me, a goalkeeper must stop this free kick," Subasic said. "There is no excuse.

"When I'm in charge, I'm responsible, it's like that."

The result left Monaco second in the table and three points adrift of leaders Paris Saint-Germain, who are scheduled to play Dijon on Saturday.