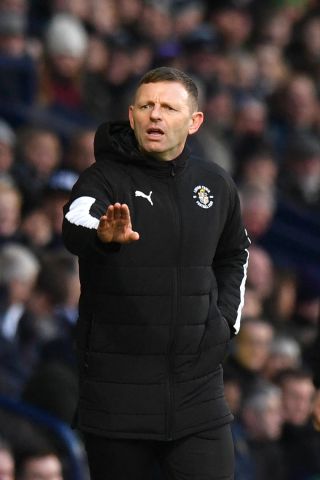 Luton boss Graeme Jones hailed an exceptional display from his side as they defeated promotion-chasing Brentford 2-1 at Kenilworth Road.

Up against a side who had hammered them 7-0 earlier in the campaign, Luton gained revenge to climb off the bottom of the table Sky Bet Championship once more and move four points from safety.

Jones said: “The level of performance has been there for a good time, but we had to win in a different way tonight.

“We couldn’t take Brentford on and try and beat them, we had probably too many injuries.

“Off the ball I thought we were absolutely outstanding, set-pieces were important, character of the players, energy and the players need to take all the credit, to a man, they were exceptional.

“Brentford are an outstanding football team, that was a high level game tonight in terms of off the ball, tactical performance from us.

“If they’d won tonight they’d have gone third in the league and we won the game with our character, our off-the-ball press and intelligence, set-pieces and it was a different way of winning for us.

“Because I’d still prefer to take people on with certain players if they are fit and we had to find a different way tonight and that was so satisfying.”

Luton were in front after nine minutes when Bees defender Shandon Baptiste deflected Luke Berry’s free-kick into his own net.

Hatters keeper Simon Sluga saved superbly from Said Benrahma and also kept out Josh Dasilva’s curling attempt, before Luton moved 2-0 ahead on the stroke of half-time, Martin Cranie lashing a volley into the top corner.

After the break Harry Cornick might have added a third before Ollie Watkins pulled one back with seven minutes left.

A frustrated Bees boss Thomas Frank said: “People are disappointed, after a performance where there was a lot of effort, a lot of willpower, but not enough quality.

“Throughout the game we just needed to keep going and keep creating opportunities and keep locking them in which we did very well against Blackburn.

“I don’t think we managed to get enough tempo into the game, Luton did what they could do and did well to get in front and do everything they could to break the rhythm of the game.

“We concede two soft goals on two set-pieces when we’ve improved massively compared to last year, but when we are conceding two soft goals and you need to again turn a game around.

“We couldn’t do that today, so we only need to look at ourselves and stop conceding these soft goals, as we have the best defensive record, but we couldn’t find enough quality.”