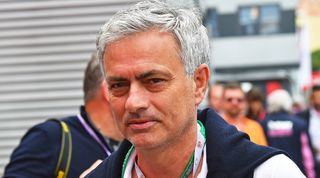 Unai Emery has come under pressure at the Emirates after a difficult start to the 2019/20 campaign.

And while Arsenal don’t appear to be planning a dismissal of the Spaniard any time soon, ESPN FC reports that Mourinho would want to talk to the club if a position becomes available.

The Gunners were knocked out of the Carabao Cup by Liverpool on penalties on Wednesday night following a thrilling  5-5 draw.

Mourinho has been out of a job since being sacked by Manchester United in December 2018 but lives in London.

Sky Sports News backs up the report by claiming that the Portuguese boss is eager to return to the English top flight with a third club.

He has received offers since leaving Old Trafford, turning down the chance to manage Benfica in January before rejecting a lucrative proposal from China over the summer.

Mourinho has been heavily linked with a return to Real Madrid after a problematic start to the season for Zinedine Zidane at the Bernabeu.

But Sky’s sources say that suggestions the 56-year-old is waiting for the Real job to become available are “untrue” and he would find the prospect of another Premier League job very appealing.

At United, the Portuguese led the Red Devils to the Europa League and League Cup in 2016/17.