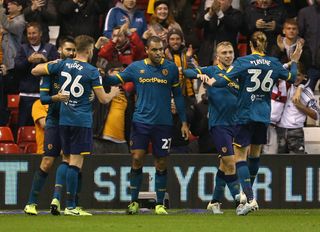 Josh Magennis scored and was sent off as Hull condemned Nottingham Forest to consecutive Sky Bet Championship defeats with a 2-1 win at the City Ground.

The impressive Jon Toral created both goals on his first league start for 17 months, with Magennis and Jarrod Bowen the beneficiaries.

Matty Cash pulled one back for the promotion-chasing hosts before Magennis saw red, but Forest were unable to force an equaliser – although they were denied what looked a clear penalty when Reece Burke brought down Sammy Ameobi.

Both sides made four changes from their respective defeats at the weekend and the returning Joao Carvalho created the first chance of note after five minutes when he jinked past two defenders before curling wide from 20 yards.

Toral, whose last league start came in May 2018, saw his curling effort parried away by Brice Samba after 19 minutes and the Spaniard volleyed wide on the turn shortly afterwards.

At the other end, Carvalho found Lewis Grabban on the edge of the box but his low effort trickled wide.

Kamil Grosicki played in Bowen on the half-hour mark, but he shot straight at Samba from close range.

Grabban headed over Joe Lolley’s corner from six yards, but just as Forest seemed to be finding some momentum Hull took the lead.

Toral was at the centre of things again, playing a one-two with Callum Elder before his low shot was prodded home from close range by Magennis.

Lolley saw a long-range effort parried by George Long as the hosts sought an immediate response, and they might have had a penalty on the stroke of half-time when Grabban went down under a clumsy challenge in the box.

Hull started the second half on the front foot, with Grosicki picking out Bowen at the back post only for Samba to make another fine stop.

However, there was no denying Bowen his seventh goal of the season after 48 minutes when Toral squared for the 22-year-old and he coolly slotted the ball past Samba.

Four minutes later Forest were back in it – Cash surging forward from right-back and firing past Long.

Grabban turned a Cash cross wide from six yards moments later and Forest were denied what looked a stonewall penalty when Hull defender Burke missed a long ball over the top, Ameobi latched onto it and was then scythed down by Burke when clean through.

On that occasion referee Oliver Langford waved play on, but he had little hesitation sending Magennis off in the 67th minute for a dismal tackle on Ben Watson.

Long had to be alert to turn substitute Rafa Mir’s flick from a Tiago Silva free-kick behind 10 minutes from time, and from the resulting corner Joe Worrall headed inches wide.

Lolley saw a stoppage-time effort deflected over as Forest failed to convert their numerical advantage into an equaliser.