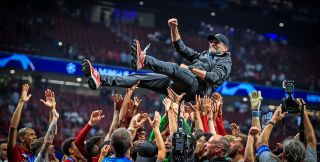 Liverpool manager Jurgen Klopp insists he would “run through a brick wall” for his players.

Such a phrase is usually applied the other way around to emphasise a squad’s full commitment to the cause, but the Reds boss said at Anfield it works for him also.

“I would run through a brick wall for them, 100 per cent, with all I have. Without a question,” Klopp told Robbie Savage’s Premier League Breakfast programme on Radio 5 Live.

“I don’t know how we created it (the team spirit). We were lucky with recruitment because of the characters of the boys.

“We treat each other respectfully, we dream together and try to fulfil our dreams together.

“It’s really not that difficult, but I couldn’t write a book about it because I don’t think about it. It’s just what we do day after day.”

There is no doubt the feeling is reciprocated by the players, with their efforts on the pitch over the last three seasons being rewarded by the club’s first league title in 30 years, adding to the Champions League won last summer a year after they were beaten in the final by Real Madrid.

Liverpool have also added the UEFA Super Cup and the FIFA Club World Cup in the last 12 months and midfielder Alex Oxlade-Chamberlain puts that down to the work ethic which exists at Melwood.

“It’s intense. There’s no days off at all and there’s no tolerance for levels to drop,” he told the BBC’s Football Focus ahead of Sunday’s visit of Aston Villa.

“If they do from time to time as a team, we’re reminded that that’s not good enough and that’s not where we need to be to progress further.

“I think this sort of period now is a really good period for us. Obviously we’ve achieved what we’ve achieved now and that’s massive for us as a team and, more importantly, for the football club after so long for the fans.

“It’s hard to keep up those levels and that consistency every year. We now need to keep pushing and pushing ourselves.

“Playing for this manager, that’s exactly what he does every day. That’s what we know and what we’ve come to expect. That’s just normal now.”

From Klopp down it is a mantra which has been adopted by every member of the playing and backroom staff.

All the players have improved under the German’s guidance, with Trent Alexander-Arnold a case in point, taking just 19 months from his first-team debut to become an England international and continuing his progress to become one of the best right-backs in the world – at the age of 21.

Asked what was key to his rise, the academy graduate said: “I think my competitiveness.

“I was just going into training every day making sure I won and beat the person I was trying to play against and, by doing that, I just found myself always improving.”

Speaking to redbull.com, Alexander-Arnold added: “I try to be competitive in training, in anything: in passing drills I try and challenge someone, who makes a mistake first, who’ll score the least goals, obviously (with) me and Robbo (fellow full-back Andrew Robertson), who will get the most assists.

“It just makes me such a better player because I’m focused so much on winning that I put everything that I have into it.

“I feel as though there’s so much more that I can be better in, and there’s more I want to achieve, and so it’s difficult for me to stop and relax.

“People might think I’m a bit big-headed, but I know myself that I can get as high as I want to get to, defensively, if I work hard enough for it. I feel as though the sky’s the limit, really.”