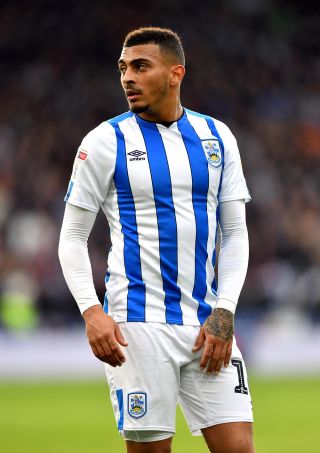 Karlan Grant scored twice and substitutes Steve Mounie and Juninho Bacuna were also on the scoresheet as Huddersfield eased their relegation fears with a 4-0 win at home to Charlton.

In-form striker Grant, signed by the Terriers from Charlton in January last year, took his tally for the season to 16 – four in his last five games.

The hosts started brightly but it was Charlton who created the first chance of the game when Erhun Oztumer forced Terriers goalkeeper Jonas Lossl to save at his near post.

A bad error from George Lapslie allowed Grant to pounce and put the hosts ahead. Lapslie’s clumsy back pass put centre-back Deji Oshilaja under pressure and Grant pinched the ball to score.

Midfielder Lewis O’Brien had a powerful left-foot shot charged down on the edge of the box as Town looked to double their advantage, before Chris Willock blasted high and wide.

Aiden McGeady rifled over from distance as Charlton looked for a response, but then Dillon Phillips pulled off a fine one-handed save to prevent the home side from doubling their lead.

He blocked Arsenal loanee Emile Smith Rowe’s clever shot on the turn, and goalscorer Grant followed up by lashing into the side-netting.

Addicks’ top scorer Lyle Taylor had a shot deflected wide for a corner just before the break, but the visitors struggled to make an impact.

Adam Matthews’ goal-bound effort was blocked by Harry Toffolo but Phillips kept them in the contest with a wonderful point-blank save from Willock.

Striker Fraizer Campbell had a penalty appeal turned down after a tussle with Charlton skipper Jason Pearce left him flattened in the box. Referee Geoff Eltringham waved away the home side’s protests.

Willock lashed wide as the Terriers threatened and Smith Rowe fired over from the edge of the box.

Josh Cullen curled over as Charlton went close to levelling, but sub Mounie made an immediate impact, bundling in Toffolo’s pinpoint left-wing cross to put the contest to bed.

Grant raced onto a Bacuna pass and slammed in a third from close range and Bacuna sealed the points with a superb strike from distance.