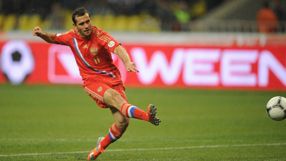 It was the striker's third goal in the first three qualifiers following a brace in last month's 4-0 drubbing of Israel.

Following the goal, the visitors dominated for the remainder of the first half and Portugal captain Cristiano Ronaldo was a constant threat but did not get many clear-cut chances in the persistent drizzle.

The Real Madrid forward, who showed no ill effects from a shoulder injury he sustained in Sunday's Spanish league match against arch-rivals Barcelona, first tested Russia goalkeeper Igor Akinfeev with a low shot in the 11th minute.

Portugal full-back Bruno Alves, who plays in the Russian league for Zenit and looked more comfortable on the slick surface than most of his compatriots, had probably the best chance in the first half but his powerful header was well saved by Akinfeev.

The visitors continued to pile on the pressure after the break while Russia looked content to hold on to their slim lead.

Alexander Kokorin wasted a good chance to double the score in a rare counter-attack late in the game but his blast from the edge of the box was stopped by Portugal keeper Rui Patricio.

"I don't think it was a fair result looking at the way the game was played," the Portugal coach said.

"In general we played a good match. We reacted well after the goal and we followed with our pre-game plan," he added.

"Russia played a great match but I know my team can play top quality football. We came here to win and are very upset now."